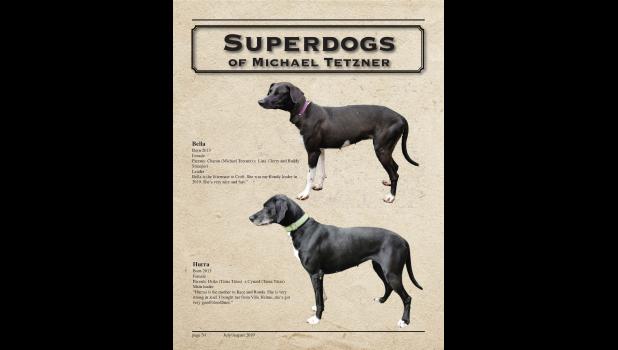 Michael Tetzner has been traveling to Alaska for years to participate in the sprint race circuit. His homebase is a farm spread in Burg, located in Schleswig-Holstein, the northern part of Germany.

Tetzner began mushing in 1987 after he witnessed a sleddog race in Germany. “I wanted to buy a shepherd dog for my farm but happened to watch a dog race and that got me into it,” he said in an online interview with Mushing. He started a kennel with three dogs and began racing in limited classes in Europe, forming dreams of racing competitively in the open classes and overseas.

The landscape is characterized by flat farm lands and green pastures, and according to Tetzner, he can train out of the kennel on trails, the limitation being the warm climate of Germany. “If we want to run on forest trails, we have to load up and drive there,” he said.

Michael Tetzner is married to Doreen and their daughter Leonie already actively participates in the entire mushing lifestyle, including racing in junior classes. Tetzner said, it’s a family affair and in addition to him, Doreen and Leonie, they employ a handler to help at the farm.

The Tetzner Racing Farm houses 70 dogs, with 42 adults in training and the remaining dogs are either retired or pups. Asked for his bloodlines running in his team that he characterizes as European sled dogs, Tetzner said he breeds his own with bloodlines hailing from the Streeper Kennels and Ville Halme.

The Tetzners keep their dogs in runs with kennels, surrounded by green, grassy grounds and part of the training is conducted on a wheel. For reliable training on snow, the family packs up their dog teams and move to Alaska for the winter, where they compete in sprint races at the Montana Creek Dog Musher’s track near Talkeetna, ASDRA and ADMA races in Fairbanks and   Anchorage.

Tetzner said the trip from Germany to Alaska is becoming more and more difficult and expensive and takes meticulous logistical planning. “Maybe one day I can sell my company and move to Alaska,” Tetzner wrote to Mushing.

The immediate plans are to participate in the triple crown of mushing, the top three sprint races in Alaska: the Fur Rondy World Championships in Anchorage, the Open North American Championships in Fairbanks and the Tok Race of Champions in Tok.

Tetzner said he is proud of his achievements in mushing, given that he can only train about 6 km in early December in Germany. He lists as his major achievements a world championship win in 2012, a third place at the ONAC, a fifth place at the Rondy and several world cup and Europe cup victories.

As for his training philosophy he said, “We must trust our dogs, as they show us when they’re ready to win. But that takes lots of trust, patience and time.”