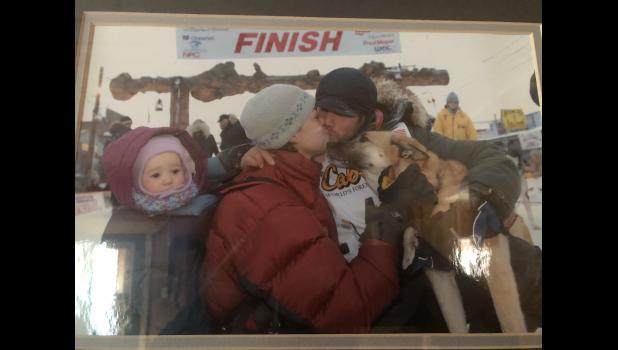 In this edition, Mushing Magazine features a legendary dog who has passed on already. It is Babe, Ramey Smyth’s famous leader that won the Golden Harness Award in 2008 and lead Smyth to a second place finish in the Iditarod in 2011 when she was 12-years-old.

Here is Babe in Ramey’s own words:

Babe was born summer of 1997 at my family’s Perseverance Spring farm. Her mom was Legs from my dad’s old storm leader line, I believe, predating Iditarod, crossed with old Attla blood. Legs was my main leader when I won Jr. Iditarod and the 1995 Kuskokwim 300. Her dad was a dog named Scout from our families lines that go back to Seppala blood roots.

Babe had an important brother named Dude who made the core of the team because the harder it got the crazier to go he became.

It was clear Babe was special to me when she was approximately seven-months old. I had sent my race leaders with my brother Cim out of state to race the Stage Stop. Around that time —at seven-months age—  Babe started to refuse to stay home and became the incidental leader for my team. Running in front free for more than 40 miles at a time. She would finish up pretty tired so I had to baby her after every run thus I named her Babe. Even penned or tied she would escape to get in front of the team so eventually I gave up and just let her be the free leader.

Her personality was special because she made a full effort to be a sled dog and a friend, obviously bonding. I didn’t have to train her, somehow she just knew what was needed or wanted and did it. Somehow she just understood from speech or hand signals.

She could break trail running free in front of 26 dogs or run heel at the sled with minimal verbal communication. Her leadership abilities while in harness were impeccable. If she ever did something wrong I would just say “What are you doing?’ She knew what needed to be done and did it.

She even knew tricks, like sit ‘Stay’ and ‘Roll over’. I didn’t teach her that, she knew by hand signals.

After her first Iditarod at age two, she finished 10 Iditarods in lead and multiple mid-distance races for me. After two, I never dropped her and she was always ready at the start line. A very happy cheerleader. I was a very lucky musher.

She was special because she had an indomitable, loyal, affectionate spirit. She was always there for me when I needed her, be it a horrific coastal blizzard or just a hard day at home.

She had two litters of pups. One litter was part of my brother Cim’s leader line “Louie” and part of Jessie Royer’s leader line. The second litter was three pups who made my and Cim’s team. The best one — my greatest leader ever —was named Scott . He grew up at a Talkeetna hostel being a young pet to climbers preparing to climb Denali.

She passed from cancer to soon at age 13. To this day I miss her.

About Ramey Smyth: He operates Smyth Racing Team-Homestretch Kennel in Willow, Alaska. He was born into mushing as he is the son of son of Iditarod mushers Bud Smyth, who raced in the first Iditarod, and the late Lolly Medley who raced in the second Iditarod. The Iditarod Golden Harness award is named for Lolly Medley. Ramey has raced the Iditarod 22 times placing in the top 10 eleven times. He won the Kuskokwim 300 in 1995.