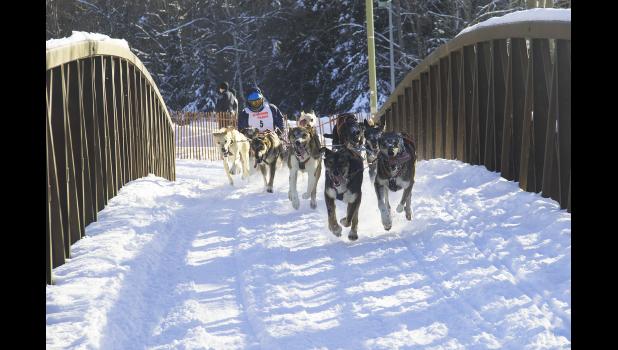 Can the Fort Nelson, British Columbia, sprint musher ascend to the pantheon of his sport, where only two men reside? As most sprint mushing fans know, 10-time champion George Attla of Huslia and his longtime rival, Roland “Doc” Lombard of Wayland, Massachusetts, who collected eight titles, are far and away the winningest mushers in race history. The duo battled on Anchorage roads and trails during the 1960s, 1970s and 1980s when the Rondy often commanded more attention than the Iditarod Sled Dog Race. They remain the winningest mushers in a race that dates back to 1946.

With his victory this year, Streeper broke a tie with five-time winner Egil Ellis to be the only musher to have won the race six times. By doing so, he broke an eight-year stretch of not winning the Rondy.

At age 36, Streeper should have plenty of time to pursue more titles. After all, a woman nearly twice his age, 66-year-old Roxy Wright, delivered arguably the most amazing performance by any Alaska athlete with her 2017 Rondy victory. That race marked the first time she’d competed in the world championship since 1993.

“That is pretty cool to be thought about getting up in the realm of Attla and Lombard,” Streeper said. “I never like to get too far ahead of myself. Heck, it took me a long time to get No. 6. If I win No. 7, I’ll be pretty happy.

“In fact, if I knew there were actually going to be 10 Rondys over the next decade, that would be good. But who knows with the warming weather. Seems like it’s either 33°F and raining or 32°F and a ton of snow,” Streeper said.

Since the turn of the century, the race has been scrubbed five times due to warm weather and lousy trails.

It wasn’t always that way.

When Buddy was growing up, the passion of his dad and uncle — Terry and Eddy Streeper, respectively— for sprint dog racing at the Rondy was addictive.

“This is the race that I grew up idolizing,” Streeper said. “My father and my uncle, they competed in this race in the ‘80s [Eddy won in 1985 and 1987]. My grandpa bought a $20,000 satellite TV in 1980 so he could get Channel 2, and the live coverage, and we would go over there like it was Christmas, like it was Thanskgiving. Everybody in Fort Nelson was interested in that, there’d be a hundred people in that little room.

“When (we) were 15-, 16-years-old, we were in career class, and kids were writing they want to be a teacher, they want to be a doctor, and I wrote I want to come up to Anchorage and race in the Fur Rendezvous, and I get to do it.

“So I’m super proud of [this year’s] team and … consider myself a very lucky man.”

Even though he only captured one of the three heats, Streeper wound up more than four minutes ahead of runner-up Greg Taylor, who edged third-place John Erhart by less than a minute.

About two weeks before Rondy kicked off, Taylor heard from race officials that the race was likely a go despite iffy snow cover. “It was a big surprise to us,” he said.  “In the early part of February, we didn’t think there was going to be a race, so we really backed off on our dogs. Then we hit the panic button.”

Even though Taylor does much of his training on streets in a Fairbanks subdivision, the Anchorage course proved challenging.  “The first day I took off with my best pair of two-year-olds, Sharky and Booker, up front. But Sharky sometimes was freaked out, scared of the overpasses and the bridges, and he shut me down a couple of times.”

And when the competition includes Streeper, shortcomings tend to get exposed.

“Buddy is like a freight train,” Taylor said. “They raise a tremendous amount of dogs. They’re dedicated, smart and they have the drive. I don’t know if I really want to dedicate that much of my life to sprint racing.”

So what to do?

“We definitely need to put more miles on our dogs, and fit in a couple of more key dogs. It can happen if we do our breeding program right and train ‘em up. Roxy [Wright, the 2017 Rondy champion] proved that [the Streepers] can be beat.”

But Blayne isn’t the only Streeper to contend with these days.  Among the most noteworthy runs over the race’s three days, was the Sunday run of Lina Streeper, 33, who beat her husband’s third-heat time by a minute to zoom up the standings from 11th  place to sixth position.

Lina is lighter — 135 pounds to Blayne’s 235 — than her husband. But there’s no issue of who gets which dogs from the couple’s kennel of 127 animals.

“My wife tells me what to do,” said Blayne, who nonetheless typically gets first dibs. “It helps to have power, and I’m big enough that I can control those dogs.

“In Fairbanks [at the GCI Open North American Championship a month after Rondy] I wanted her to run the main team, but she said, ‘No, I like the young ones.’ ”

The couple finished in first and second place with Buddy on top, even though he trailed his wife in two of the three stages. “That third day,” Blayne said, “she put a magic carpet ride together” to record the day’s fastest time, just as she did in Anchorage a month earlier. “That was pretty awesome.”

And Lina may not be the only sprint musher standing in Blayne’s way. Taylor, a 59-year-old commercial fisherman from Fairbanks, and John Erhart, a 43-year-old water sewer foreman from Tanana, were second and third respectively at Rondy.

“When you put two Alaska Natives on the podium, there are more people interested on the third day than the second,” Blayne said. “It’s really good for the sport and great to see the people cheering on the Alaskans.”

But every musher is only as good as his best dogs. “We breed out quite a bit to other kennels, including Jason Dunlap of Salcha,” said Taylor. “You’re always looking for those Michael Jordans, Larry Birds and LeBron James. They have to be super tough and fast.

“But it’s tricky.  Speed kills. I like to keep them below 18 mph or slower on training runs. Dogs get burned out and injuries start to creep up. It’s tough.”

Whether strong finishes by Alaska racers fuels greater interest in the Rondy and sprint mushing in general remains to be seen. During its heyday, the head-to-head competition between Attla, an Alaska Native star from Huslia, and Lombard, an Outside musher, bolstered fan interest.

“Attla was like Michael Jordan, and that was pretty cool.  Then Susan (Butcher) won the Iditarod and everything changed. Sprint mushing was left looking for its own niche, its own way to grab the public’s attention,” said Streeper.

Promoting the sport’s speed may be one way.  Sprint dogs run faster than 20 mph, much speedier than Iditarod dogs that travel much farther each day.

“Look at the Olympics,” Streeper said. “Most public interest is in the 100-yard dash, but I can’t tell you who won the Boston Marathon this year.

“I honestly think the sprint racing appeals to the pet owner.  They think, ‘Hey, we can do that.  We can go out and run for an hour.’  [Sprint] dogs go from zero to full blast in a block. They work hard for an hour and then get 22 hours off.”

In any case, Steeper plans to be back at Rondy in 2019 with Elvis, his supercharged lead dog.

“This was his breakout year,” Streeper said.  “He’s right in his prime. We have a lot of good dogs coming up behind him, but they’re going to have a lot of work to do to knock off the champion. A bad day for Elvis is a good day for most dogs.”