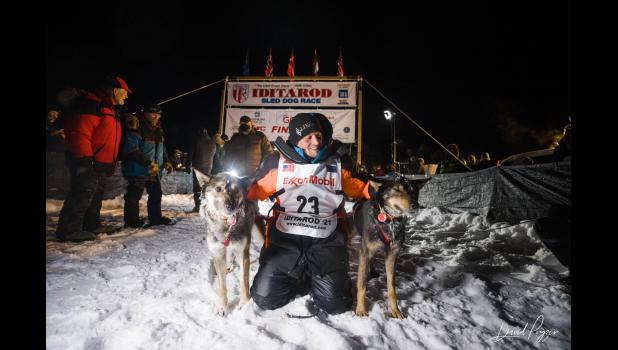 Talkeetna musher Dallas Seavey crossed the finish line at Deshka Landing on March 15, a Monday morning, at 5:08 a.m. winning his fifth Iditarod, and thus tying Rick Swenson for the distinction of holding five Iditarod championship titles. Seavey had 10 dogs in harness when he came across the finish line to win the Iditarod 49 title in 7 days, 14 hours, 8 minutes and 57 seconds after 848 miles on the trail. The trail this time did not end in Nome, but took mushers from Deshka Landing, north of Willow, to Iditarod and back. The trail was dubbed the Gold Loop trail and originally was going to take teams on a loop to Flat — an old mining camp near Iditarod — but heavy snowfall caused race organizers to scrap that loop and turn teams around at Iditarod. COVID-19 considerations caused the Iditarod Trail Committee to follow the usual race course to Nome as villages along the way expressed concerns that the virus would be brought in with Iditarod mushers, officials or other Iditarod-associated travelers.
Seavey was greeted at the finish line by his father Mitch, a three-time champion, and his mom Janine Seavey.
“I’m really proud and happy for Dallas,” said his dad Mitch, as Dallas walked from dog to dog to thank them. “All he’s been through a lot these past three years, and he put so much into this race and it came out good for him. Things don’t always come out the way you want but he gave it his best effort, put all of his talent into it and sure enough he got first place. We’re pleased and excited and I’m just happy for him.”
Dallas Seavey’s team consisted of five dogs out of his own kennel and nine dogs from his dad Mitch’s kennel. They are Prophet, Gamble, Canton, Pecos, Swifter, Cobra, West, Viacon, North, Mustang, Yak, Rip, Frisbee and Ace.

Five wins
In an interview with this reporter a few days after the race, Dallas Seavey said that while it has not fully sunk in that he just notched a historic fifth win of the Iditarod – only Rick Swenson had the distinction of being a five-time winner until now – the win serves as a verification of his training, his philosophy and his dog care. “We tried really hard to do everything right and to have a well-cared for team and that’s the step for success. I think it is verification that a lot of the things that we’re doing are correct and the right way to do it for the team,” he said.
This is Seavey’s first Iditarod run in three years after the Iditarod raised allegations that he used illegal substances on his dogs. The Iditarod cleared him of any wrongdoing, and he raced for two years in long distance events in Norway before returning to the Iditarod this year.

Despite the challenges posed by the COVID pandemic and a different route that didn’t end in Nome, he and many other mushers were grateful for the fact that the Iditarod held a race and thus celebrate the human-sled dog connection. “I think that’s a great thing to celebrate humans and animals working together, particularly in Alaska where human existence in Alaska has been dependent on animals, on sled dogs for so long. We have to remember that and we have to celebrate that,” Seavey said.
But what does it mean to not finish the Iditarod in Nome?  “Nome has always been the finish, you know, under the burled arch, and that’s means a lot to us,” he responded.  “But the race, it’s still about traveling with dogs in Alaska, celebrating the sled dog, and we had the best dog drivers in the world here with the best dogs in the world and a challenging trail.” The trail which went from Deshka Landing to Iditarod and retraced its steps back to Deshka Landing posed challenges of going through the infamously bare dirt and icy Farewell Burns, the Dalzell Gorge and the Happy River steps twice. But challenging terrain or weather cannot faze the musher as he is to be the coach and make each run, each section of trail fun and worry-free for the dogs. Seavey explained his philosophy by saying that he makes sure his dogs understand that he’s got their backs and has built up that confidence and trust needed. He said one thing dogs cannot handle well is having to worry and over the years of raising and running the team, he instills trust and confidence in the team. “You can tell somebody that they're good at something a thousand times, but they will not have to confidence until they see it for themselves. And so with the dog team, I am making sure that they understand that whatever happened, we're going to do it as a team, whatever challenge comes our way, we're going to handle it as a team. You’re not on your own, you’re going to have the support you need. And then it’s about overcoming challenges —challenges that are within their grasp, that they can go out there and feel that, yeah, this is a little bit difficult, but we did it! And I think every human can relate when we’ve done something that was challenging and we feel proud of ourselves for accomplishing that.”
Challenges did not only include rough trail conditions but warmth in the first part of the race and then bone chilling temperatures of - 55°F between Iditarod and Nikolai.
In the end, the leap-frogging that occurred between Seavey and runner-up Aaron Burmeister came out favorable to Seavey.
Aaron Burmeister arrived at the finish line in his career best finish of second place. His trail time was 7 days 17 hours 23 minutes 5 seconds. After hugging his two children and wife Mandy, he said in an interview that he was close, but “it wasn’t quite good enough” for a win. Burmeister ran his first Iditarod in 1994 when he was 18 years old and finished 20 Iditarod races.  “It has been a lot of years of chasing this race,” he said. “But it’s not just a race, it’s a lifestyle. It’s something that we love and love being a part of. This year was a different challenge, with a different course and not having any interaction with the communities, which is one of my favorite parts of the event and the sport. Traveling to the villages and seeing the people out there but it’s an honor of being part of the event that took place this year and to be able to be out here on the trail. ”
Burmeister said that Seavey and he were on completely different schedules. Months before the race, he said, he wrote up different schedules, a passive and an aggressive schedule. “The aggressive schedule I had was the schedule Dallas ran this year, almost run by run,” he said. “So, I knew his play all the way around and I knew that the schedules would come together at Nikolai on the way back. And it did. He was resting in Nikolai and that’s when we started leap-frogging. Every run was going to be a leapfrog until he’d pass me again at Finger Lake.” Burmeister gained on him – after a six-hour difference from the halfway point of Iditarod on — and was an hour and one minute behind Seavey when they reached the last checkpoint Skwentna, for a mandatory eight-hour rest. “It didn’t come together in the end. But it was an incredible race,” said Burmeister. He came in three hours and 15 minutes after Seavey, at 8:23 a.m. with ten dogs.

The race came to an end shortly after midnight on March 18 when Victoria Hardwick claimed the red lantern. Thirty-six mushers and their teams finished the race, with ten scratches including 2019 champion Pete Kaiser. Also, Aliy Zirkle scratched after she crashed and sustained a concussion and dislocated shoulder. In a statement she wrote later, “My crash, and subsequent injuries, happened on an icy section of trail just past Dalzell Gorge. My sled flipped and I remember a very hard impact to my head, seeing black and then severe pain on my right arm and shoulder. All I remember thinking was I had to get to Rohn. I couldn’t use my arm and I began vomiting.”

She made it under her own power to Rohn but was airlifted by helicopter from the remote checkpoint to medical care in Anchorage. Prior to the start, she had announced that this was her last Iditarod race. Musher Gunnar Johnson was withdrawn from the race when he tested positive for COVID-19 in McGrath. Not racing were last year’s champion Thomas Wærner and other mushers from Norway and Sweden as it was nearly impossible to travel with a dog team to the US due to COVID-19 travel restrictions.