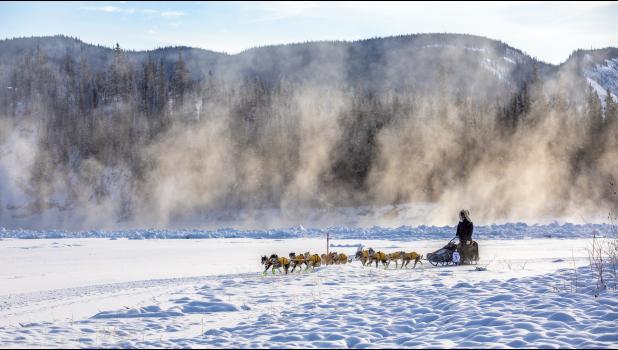 Brent Sass back with his second Quest victory in crowded field

At his first rest stop of the 2019 Yukon Quest in Carmacks, defending champ Allen Moore was feeling pretty good about his first tactical decision to run the ninety miles without a stop. Was that too much for the defending champion team?

“I don’t think so or I probably wouldn’t have done it,” he said through his Arkansan drawl.

But, he added some prescient words: “It’s a gamble. Everything’s a gamble. And I’m gambling that it will help out a little bit.”

Moore enjoyed a mandatory 12-hour rest in Carmacks, which he thought would be more than enough for his indefatigable team from last year, which finished 14 strong, without dropping a dog. Even though he had run into some overflow at -50°F, he was only minutes from the lead.

Despite pre-race warnings of low snow and warm weather in the week prior to the race, start day in Whitehorse gave way to more characteristic Quest temperatures of about -45°F along the Yukon River. Ten days before the start, trail crews and organizers decided that the safety risk for mushers and their dogs was too great with 14 dogs, and allowed racers to start with as few as eight dogs and then add more dogs to reach the normal team size of 14 at either Carmacks or Pelly Crossing.

Organizers also cut out a 70-mile section of trail between Braeburn and Carmacks and added a mandatory 12-hour rest so that mushers could shuttle their dogs to the next checkpoint. Doing the monster stretch in frigid temperatures and with low snow was risky, but Moore figured the mandatory rest could make up for that.

In fact, it was the darkhorse musher Hans Gatt, a former four-time champion back in the Quest after an eight-year hiatus, who was the first out of the mandatory rest in Carmacks. Driving a young team whose inexperience would lead to several headaches later in the race, Gatt’s pre-race promises that he wouldn’t be competitive this year looked like a cunning bluff, and he held onto his lead all the way to Pelly Crossing, about 250 miles into the race.

His average speed was also fast, often cruising above 10 miles per hour in the first runs. He gave credit to his dogs, many of which had never raced before, and said he was looking forward to adding four more dogs, which included his experienced leaders.

“I had a few pretty severe tangles along the way where they went the wrong way and stuff like that. But from here on, it’s gonna be a different story,” he said.

By his own admission, 61-year-old Gatt wasn’t the same musher he used to be. He said he was already aching after the first couple runs.

“I was pretty miserable out there,” he said, “I'm feeling like I’m an old man I can tell you that much, it’s not like it used to be.”

Prior to the race, Gatt explained his reasons for returning to the Quest, a race he dominated from 2003 to 2004 before he was unseated by Lance Mackey’s four-year streak. His most recent attempt in 2011 ended in Central after plunging into Birch Creek in -50°F weather. Gatt scratched and vowed never to return to the race.

But after a couple of unlucky Iditarods in the past years, Gatt decided it was time to return. He said his original decision was compelled by an Austrian film crew that had wanted to follow Gatt’s training and race, but that plan fell through. Instead of withdrawing, Gatt said he actually started to feel better about the race, and he allowed himself to be pulled into the competition. He also said he was motivated by a different concern.

“I want to show that they made the right decision about dog care,” he said before the race.

Gatt was referring to the Quest’s decision to bar another former champion, Hugh Neff, from partaking in the 2019 Quest. That was after one of Neff’s dogs died during the race between Eagle and Dawson. Neff protested vociferously, and claimed that text messages he had sent to race vets just prior to the dog’s death proved his concern for the dogs. Despite numerous appeals, the Quest organization upheld its decision and had its largest field in recent years. It also coincided with the scandal-ridden Iditarod having one of the lowest number of entrants of recent years.

Though Gatt was the first into Pelly, he stopped to rest and let Allen Moore take the lead. Moore arrived around midnight and stopped for a total of 21 minutes before continuing on to the next hospitality stop in Stepping Stone, another thirty miles up the trail. Moore’s run times were slower than some of his competitors — nearly eleven hours to Gatt’s less than eight from Carmacks to Pelly — but nonetheless, his cool judgement and experience from last year made him someone not to underestimate.

In Dawson, it was a surprise midway victory for Brent Sass. Sass skipped last year’s race. He was flying under the radar for the first quarter of the race, despite numerous lead changes. Sass pushed past Scroggie Creek, the second hospitality stop on the run to Dawson, where he bedded down for a rest around midnight.

“I still don’t know why, like, ten people didn’t pass me on my last camp stop,” he said in Dawson, “I just waited there. Hans Gatt went by me and went about a quarter mile and just stopped like he was gonna wait for me or something.”

Sass insisted before the start that he was running his own race, that his history of pushing too hard at the start only to have his team give up was a thing of the past. In 2017, the last time he raced, Sass withdrew in Central out of concern for two of his dogs that collapsed on Birch Creek. The new Sass seemed humbled, matured and refocused.

“It’s all about having fun and getting these dogs over the trail for the first time in a really upbeat, happy state, so that they’re primed for future races,” he said of his team that included just four Quest veterans. “That’s sort of my focus for this year.”

Still, Sass said his team had impressed him with a second place finish at the warm-up Copper Basin 300 a couple weeks before.

“They proved they really have some speed and they have the ability to recover, and I’m really excited about what we’re gonna be able to do on the Quest trail this year,” he said before the start of the race.

The second place arrival in Dawson was also a surprise. Michelle Phillips’ team was gaining time on Sass when she arrived, just 37 minutes after Sass.

“The dogs are performing really well,” she said in Dawson, “A really beautiful group of dogs. They’re all eating and very happy. They’re moving along at a nice pace.”

Her run time from the previous checkpoint was the fastest of the race in one day and 10 hours and her dogs were still raring to go.

Allen Moore, who arrived 27 minutes later said that Phillips’ dogs looked better than any other team he had seen on the trail. Moore, for his part, came into the halfway point in third, but he had to do two seven-hour runs with just two hours of rest in between. He had clearly lost some confidence during the last runs.

“They’re not running nearly as well as last year,” he said, “Last year was the magic carpet ride that we all look for. I had nothing go wrong, and this time is a little different with that first hundred mile run, it kind of knocked their socks in the dirt a little bit.”

Though he seemed humbled when he arrived in Dawson, Moore wouldn’t give in easy. After his mandatory 36-hour stopover, Moore charged out of the halfway point to regain the lead, which he held over American Summit in Eagle and down the Yukon into Circle.

But it came with a cost. While the mushers behind him kept to pretty equal run-rest schedule, Moore continued to take short rests, taking 17 hours of rest to his 60 hours of travel compared to Sass’s 24 hours, but Sass still came into Circle just eleven minutes behind in second.

Sass rested four hours in Circle and took the lead, but coming into Central, the top four were suddenly all within an hour and 34 minutes of each other.

That’s when Sass decided it was his turn to gamble. He charged through Central with just enough time to grab his supplies and headed out towards the infamous Eagle Summit on his own at four o’clock in the morning riding cowboy-style with just one hand over parts of the trail as he attempted to mend a broken handlebar.

In the glimmering rays of the subarctic dawn, Sass crossed the famed 4,000-foot climb, well ahead of the blizzard that would later rock the mid-pack racers, and stumbled into Mile 101 nearly broken. He asked his handler, Jason Avery, where his competition was.

“I’ll never forget the moment I looked Jason in the eye and he could see the desperation in my eyes and he said, ‘No one’s left Central’, and I just passed out basically, I was like ‘Oh my God!’” he recalled in Two Rivers.

From there, Sass was all but assured a victory. He cruised into the finish in Fairbanks with all 14 of his dogs just before noon on February 11 in under nine days to a roaring crowd.

He attributed his success to his team, particularly one of his lead dogs, Jeep, whom he bought from the widow of his former mentor and mushing legend Joee Redington.

“My dog team was just faster between checkpoints and that’s what made up the difference,” he said, “I mean, I took longer rest than almost anybody at most checkpoints until they realized they couldn’t catch up with me.”

While Sass’ team was faster than Moore’s, in fact it was Hans Gatt who put down the fastest times in the last two legs, but Gatt’s chances at a victory were thwarted by his dogs’ confusion going over Eagle Summit, where he lost a big chunk of time to Moore and Sass.

“My dogs just decided they were afraid of the wind coming down the mountain and blowing the snow in our faces and just didn't wanna go up,” he said, “So I had to walk a couple miles up Eagle Summit in front of them and my leaders just followed me when I was out front, they were just fine, but they were just scared to run into that wind so it took me a lot longer than I thought.”

In front of a group of reporters, Michelle Phillips overtook the struggling Gatt at the top, but by Mile 101, the next checkpoint, Gatt suddenly found his speed. Running with just eight dogs since Central, Gatt came into Two Rivers about 40 minutes behind Moore, having gained an hour on him on the last run.

“He only had eight dogs, but they were a fast eight dogs,” said Moore of Gatts dogs, “I knew they would probably catch me. I was just skipping on rest the last few checkpoints just to stay in front of him. That’s the only way I could.”

That gamble failed for Moore. Midway through the final stretch on the Chena River, Gatt passed Moore, who joked that he tried to tackle his fellow 61-year-old competitor. Gatt finished about an hour and 20 minutes behind Sass in second place, about as much time as his team lost going over Eagle Summit.