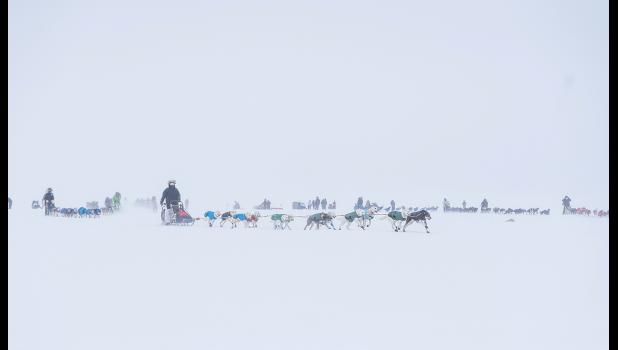 The Kobuk 440 is named the toughest dog race above the Arctic Circle for a reason. The race takes teams from the coastal town of Kotzebue across Kobuk Lake and up the Kobuk River to the village of Kobuk and back. Mushers of 2021 Kobuk 440 were in for a horrendous trip as a late season storm hammered the race from the beginning. Here, first time Kobuk 440 racer Dereck Starr of Huslia, Alaska, recounts his trip from leaving his home village by snowmachine with his friends to Kotzebue, the race and then his return trip, again by snowmachine. Hang on for the ride!

The journey to Kotzebue started on March 27, 2021 at 9:00 am.  We left Huslia with four snow machines which were all pulling a load.  Two machines pulled dog boxes filled with food, straw and other dog related items.  In the other two machines were the race sled, extra gasoline and our personal gear.  The dogs would meet us in Kotzebue a few days later by airplane. Traveling was a little slow because of our loads and rough trail.  About 40 miles out of Huslia we encountered a ground storm. Normally we would have turned around and head for home but we continued on and had a little lunchbreak at a hot springs located roughly 60 miles from Huslia.  The trail to Shungnak wasn’t any better so the traveling was slow going.  When our party reached Shungnak we were greeting with a hot pot of caribou soup from a friend I met at the hot springs a few years back.  After our meal we pushed on to Ambler and stopped to get directions to the Ambler to Selawik portage.  Not only were we given directions but also some white fish and shee fish.  Off to Selawik, the trail conditions improved and we were making decent time.  Around 11 p.m. we reached a shelter cabin roughly halfway to Selawik from Ambler.  We decided to stop and rest for the night.  It was a beautiful clear evening with a nearly full moon out in full force.

The next morning we were all starting our machines to warm them up but one machine wouldn’t start.  I ended up pulling the machine along with a dog box the rest of the way to Selawik.  On our way to Selawik the wind had picked up but didn’t seem too bad because it was coming from our back.  We reached Selawik and looked for a shop to fix the machine that wouldn’t start.  Around the same time after a call home we were told the team was just now loading a plane on the way to Kotzebue.  We ended up meeting some helpful people in Selawik who got the tribal shop opened for us and after a few hours wrenching on the machine we realized we didn’t have to parts to get it going.  So we made the decision to keep going to Noorvik.  This decision was fueled by the fact that the dogs were already in Kotzebue and we had their food and shelter with us.  While working on the machine the weather deteriorated drastically.  A friend led us out to the trail to Noorvik and when he asked if we really want to leave in this weather I realized that this might be a risky move to keep going and not hunker down. But we had to get to the dogs and according to the weather forecast, the storm was not going to subside for a few more days.   Things got pretty hairy on this leg of the trip.  We could barely see the snow machine in front of us but we seemed to be hitting trail marker after trail marker making decent progress until we veered off the marked trail.  We lost the trail for about an hour or so, but it seemed a lot longer.

While trying to find the trail one of the snow machine got separated.  It happed fast, I was in the rear of the group and the second snow machine stopped for a few seconds and when we started driving again the lead machine was nowhere in sight.  We drove for a few more minutes to see if we could see tracks but snow machine tracks were instantly erased by snow and wind.  We tried to keep levelheaded, trying to make a game plan to find our buddy. After waiting for about 15 minutes there was a brief opening in the storm where the visibility improved and we saw movement behind us, going the opposite direction from us. We found him and reunited with the other member of our party.  What a relief.  We pulled out our GPS and backtracked until we found a trail marker.  We stopped and waited until we seen the next marker.  After a few miles I noticed a tree line to our right.  I knew we were safe now if we had to hunker down, we had the trees to give us some relief from the wind.  We were now skirting the tree line and almost missed a portage and the shelter cabin there.  Another relief: We had shelter.  We had an inReach with us and we were in contact with the tribal administrator in Selawik.  They were concerned with how bad the weather was and if we made it to the shelter cabin.  They let us know that the Noorvik Search and Rescue wanted to come and get us.  We were content with just hunkering down at the cabin.  We had wood, food, shelter and didn’t want anyone to get in trouble in this weather trying to come out to escort us but the Noorvik S&R didn’t want us out there in unfamiliar country.  The Noorvik S&R did a beautiful job guiding us to Noorvik where we were welcome with a hot meal and warm place to stay.  Even woke up to breakfast and then lunch.  In the meantime, a local helped us out with parts and place to work on the downed machine.  Weather wasn’t as bad but it was not favorable either.  With the help of a few people some who were on the S&R they made sure we made it safely to Kotzebue.  The trip to Kotzebue from Huslia was roughly 300 miles, 300 unforgiving miles.

I was glad to get to Kotzebue to check on the dogs.  They were in good hands, they were placed out of the wind and being feed. John Baker was a huge help making a place in his yard for them.

We waited a few days for other dog teams to arrive and some did without their human members of their teams. Our four-man crew helped the race officials stake out the teams.  Bad weather delayed mushers coming in and the race start was delayed.  During the banquet I drew bib number one.  On the race day the temperature with wind chill was as cold as what the race would allow.  A real cold wind with blowing snow.  During the start I was tied off to a snow machine and had trouble getting the rope released.  The handlers eventually ended up cutting the rope and we were off, in the chaos of the mass start. It was my intention to fall into the middle of the pack of mushers and hopefully stay there until we were settled in on the trail.  I ended up near the rear of the pack and it was pretty hectic getting in the rolling hills outside of Kotzebue.  I got stuck behind a slower team and passed the team but then my leaders jumped off the trail after a snow machine passed us trying to follow the machine.   While getting my team back on the trail, the slower team had passed us again and we were stuck there until we hit Kobuk Lake then I passed again but I had already lost a bunch of time from the rest of the teams.  During all of the confusion and excitement my facial hair got ice up, when the team finally settled in, I took some time to clean the ice off.  While cleaning the ice off I was thinking, ‘How the heck is there ice on my cheek?’ then I realize my face was frozen.  It ended up swelling up and a blister had formed.  Frozen face in the first five miles of the race.  When I arrived into Noorvik I stopped and snacked the dogs and visited with friends for one hour.  Then I was off to Kiana which ended up being a nice quick run on good trail.

After feeding and working on the dogs I bed them down,  I indulged on some good food that the checkpoint had an abundance of.  I tried to rest myself but couldn’t really get to sleep.  Before I knew it my timer went off to start getting the team ready to leave. By then all of the teams ahead of me were on the trail.  We took off and ran on the river until we hit a shelter cabin halfway to Ambler.  The river trail was pretty soft and slow going.  I rested the dogs for roughly an hour or so then we were on the move again on some rolling hills which I believe is called Onion Portage.  At the time the weather couldn’t really be any better, but I remember seeing a huge ring around the sun which usually indicates a change of weather or storm.  It was a little cool but that seemed good for the dogs.  After about 12-15 miles in those hills we hit the river again.  After running the river for a while, I felt myself getting tired and it seemed the dogs felt that.  I noticed they were slowing down, it was about time to snack again so I decided I should give them a little rest after a good snacking and I might as well close my eyes myself.

The next day we loaded the dogs back up on a plane and sent them home.  Our crew loaded our gear back up in our Siglund sleds and we start our adventure back home by snowmachine via Noorvik, Kiana and Ambler.  We stopped in Noorvik for a while to eat, then headed to Kiana where we were invited to a caribou soup dinner by Larry Westlake.  Then we hit the trail and got to Ambler after the long run and temperatures dropping to -20°F to -30°F with some wind.   We pushed on to Shungnak where a friend had warm soup waiting for us.   Although it was like 1 a.m. he welcomed us into his home and feed us.  We ended up getting some rest but when we woke up there were ground storm conditions AGAIN.  We waited to see if there was a break in the weather but none came.   We decide to take off around 4 p.m.  We decided that if it is bad out on the tundra, we could always turn around and go back to Shungnak.   On our way towards home the wind was at our back so it wasn’t as bad as it seemed while we were in Shungnak.  When we got to the pass to the hot springs there was a lot more snow from all of the storms, making for little slower traveling.  We make it to the hot springs and eat some lunch.  For the next 50 miles it was extremely slow going because all of the extra snow had made solid wind drifts.  In the portages, there was a lot of snow and we would get pulled off of the trail and get stuck here and there.  We eventually got home and able to get some real rest.

Before we started our trip I was saying ‘It’s going to be an adventure of a lifetime’ and it really lived up to its name. 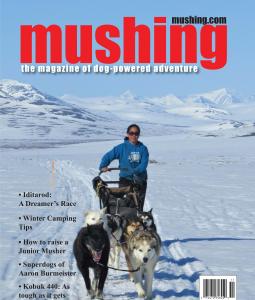