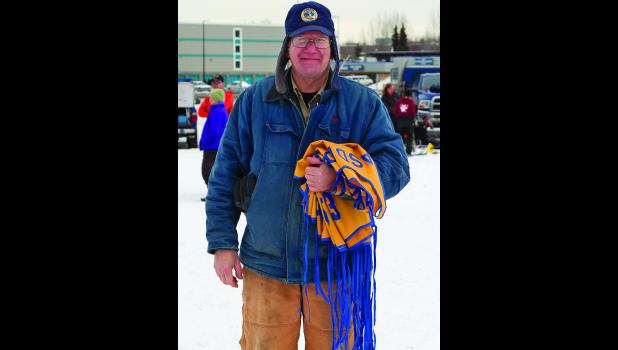 Volunteer Spotlight: John Rasmussen is the heart of ASDRA

John Rasmussen is described by his fellow ASDRA board members as “The Rock of Gibraltar.” He is the man behind the scenes at Alaskan Sled Dog & Racing Association. John quietly takes care of day-to-day operations at the club. Summer may find him walking the trails in the park, fixing bridges and repairing or replacing the signs and fences that are integral to the 18 miles of dedicated mushing trails the club maintains in Anchorage, Alaska. He might be found at the clubhouse, tinkering with mechanical equipment like groomers and snowmachines and maintaining equipment necessary for winter activities. Once the weather cools and the wet parts of the trails freeze, John shifts gears and prepares for the race season. He may spend part of many days removing downed trees, cutting brush, and preparing the clubhouse and timing tower for the upcoming race season.

The Army brought John Rasmussen from Michigan to Fort Wainwright, Alaska, near Fairbanks where he met his wife Bunny. They traveled outside for a bit but returned to live in Anchorage. John took a job with Air Liquide and spent the next 41 years working in the plant, making gasses and dry ice.

John’s brother-in-law lured him into the sport of mushing and John competed with his own team of sprint dogs in the 1970s and 80s. John and Bunny had three children and John served as the junior adviser and junior race marshal for many years. He can still be found at the start line of local junior races, whether at ASDRA or the nearby Chugiak trails. Bunny was a constant presence in the clubhouse answering phones, selling merchandise and keeping things tidy.

John’s daughter Norma died in 2001, eight days after giving birth to a son. Many people attending the funeral told stories of Norma’s helpful nature, how she shoveled sidewalks for her elderly neighbors while pregnant herself. Those same behaviors were observed at the ASDRA clubhouse, as Norma was always around to lend a helping hand, just like her father. The club named a race in her honor and every January, weather permitting, ASDRA holds the Norma Rasmussen Memorial race, with the purse donated by John’s family.

John has a son in Alaska and a daughter in Traverse City, Michigan. There are grandchildren and great grandchildren in both locations. Bunny died in 2010.

Janet Clarke, current Rondy race marshal, understands that fans are enamored with the human athletes that drive the sleds and the canine athletes that pull them. But behind the scenes exist those people who make it all happen. They are the first people to arrive, the ones who open the door and turn on the lights. And they are the last ones to leave and turn off the lights. Being a musher never defined John Rasmussen, but being an integral part of every race does. He creates the ability for races to be held.

John never set out to be the “man.” He started by helping the club fix a few things and groom a few trails. One thing led to another, and all of the sudden John was the go-to guy. After Dick Tozier died, Dr. Susan Wagnon, veterinarian and musher, assigned roles to her fellow board members to cover the loss of Tozier and everything he did for the club. John had mechanical skills and the most trail knowledge. He was the obvious choice for trail boss.

Over the years John has served in many roles with the club. His attention to detail and his dogmatic approach to paperwork has allowed the club to maintain its nonprofit status and its ever-important Municipality of Anchorage gaming permit, which provides income that can be used for trail maintenance and other club expenses.

ASDRA has honored John and Bunny by naming the clubhouse after them.

John talked about the days in the 1970s when he started mushing, before the urban expansion that took quite a bit of the good land with existing trails and made it into neighborhoods. Trails were put in by dog team and bore no resemblance to the trails of today. Then one musher bought a snowmachine and the club used that to pack a trail. Someone fabricated a drag of sorts. Now ASDRA has a Delorean groomer with a heated cab that puts in trails that are the envy of other users in the park.

Over the years, grants were written and bridges were built to provide safe passage for teams to cross creeks and streams. John laughed as he remembered a time when his dog team refused to cross a newly constructed bridge. The lead dogs went off the trail and down across the ice. John didn’t trust the ice so he let go of the sled, sprinted across the bridge, and caught the sled on the other side as the dogs climbed out of the creek.

John appreciates that Anchorage has so many outdoor activities and an extensive trail network for bikers, hikers and skiers. But sometimes enthusiastic park lovers can ruin a groomed trail. Signage is abundant but often ignored. John remembers a time he was grooming the trail at night so it could set for the next day’s races. He looked behind him and a lone fat-tire biker was following the groomer, leaving a deep 4-inch wide groove down the middle of the trail.

John works tirelessly to support the club, the Rondy and mushing in general. He and the club had a goal that one day the Rondy purse would reach $100,000. A few years ago that goal was realized, and while it only lasted one year, large purses and the race itself are still feasible because John is there to turn on the lights every morning and turn them off at night.