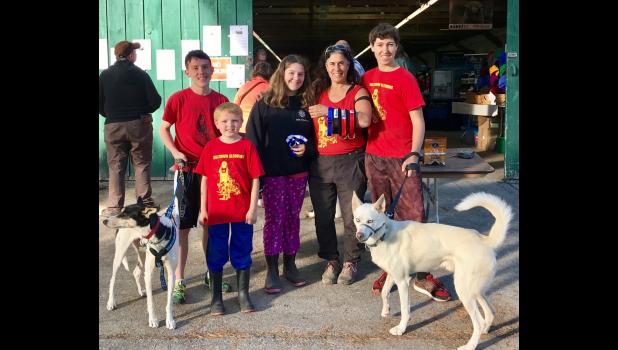 We all heard of summer riding camps where mostly horse-crazy girls without the luxury of having their own horse get to spend a week riding and caring for horses in a controlled camp environment. This concept also exists for sled dogs at Hilltown Sleddogs, located in West Chesterfield, Massachussetts. Hilltown Sleddogs is a racing kennel and touring business owned by Marla Brodsky, a competitive dryland racer and snow musher. She has a kennel of 21 Alaskan huskies, all born and raised at Hilltown Sleddogs, with a foundation bitch from Alaska’s Aliy Zirkle and Allen Moore’s SP Kennels.

Brodsky competes in the dryland sprint circuit in New England, the MidWest and Canada. Once those shorter dryland races are over, she travels north to train on snow to get ready for the mid-distance racing season. “We’ve trained in Minnesota and Canada, and this winter we hope to come to Alaska,” Marla said in an interview with Mushing Magazine.

When not training or racing, she offers dog yard tours and cart rides to clients in fall, and in the winter, she gives sled rides and mushing lessons. She also teaches people with their own dogs to mush, skijor, bikejor, scooter and cani-cross. But the summers are spent offering summer sled dog camps to kids who don’t have the privilege of owning a sled dog team.

Hilltown Sleddogs, Marla’s home and business, spreads over 17 acres. “This was old logging land that we turned into an off-the grid homestead,” she said. The logging trails are now hiking trails. “We have multiple loops, the longest of which goes down a switchback trail to a fresh water stream the dogs and campers enjoy wading in.”

Marla came up with the idea of running summer camps for kids soon after she got into the sport of mushing and dryland racing. “I wanted to do something fun with the dogs during the summer. How can I keep the dogs exercised and entertained? How can they earn their keep in dog food?” she said. The answer was summer sled dog camps for kids. In 2009, she began offering summer sled dog camps with the nine dogs she had. Today, her kennel grew to 21 dogs, enabling her to have an equal amount of campers.

She offers day camps as well as overnight and weeklong camps for kids of different age groups. The campers are supervised by her, an adult handler, a live-in handler and two or three teenage counselors, who used to be repeat campers and then morphed into junior handlers and mushers. One of them is Quinton Romer. The 15-year-old started as a camper for two summers. After his first camp week, he was drawn back to the dogs. “After my first week of camp I was so sad that it ended and I wanted to go back the next week. Marla then invited me to come the next week,” he said in an email interview with Mushing Magazine.

“It was after the second summer when became a handler, I started to help her with training runs and clients and the following summer I was a CIT [counselor in training] at her camps. Then after my third summer I went to The Northern New England Sled Dog Trade Fair in Contoocook NH, this is when I fell in love with the sport of mushing. Ever since then I have been racing the dryland sprint circuit,” Quinton added.

“The best thing I like about the camp is it’s a full week of all my favorite things: Dogs, mushing, outdoors and exercising.” While Quinton got into competitively running dogs, Kathleen Strachota, another teenage handler at summer camp, likes to be in the role of supporter. She started as a camper as well. “What first caught and kept my interest were the dogs,” Kathleen told Mushing Magazine. “I love dogs. I have one dog at home and have grown up with dogs my whole life. So, I immediately fell in love with them as they were so friendly and sweet. And now that I’m a handler, I really enjoy and value being part of the family or pack of both people and dogs that has been created. They’re like a second family.”

The 16-year-old said that becoming a handler was a natural progression of things.

“During my first camp I learned a lot about what it takes to care for the dogs because that’s what camp teaches,” Kathleen said. “I also was an older new camper, around the age of the other handlers.” She learned from Quinton and others who already had experience with the dogs and was asked to help out during the year.

At Day Camp, the age range is from 7- to 12-years-old. For overnight and week-long camps, the age range is 10- to 16-years. Hilltown Sleddogs has repeat customers as the kids bond with “their” dogs and are drawn back to the dogs and the friends they made the year prior. While day campers are mostly from nearby, Brodsky said some overnight campers come as far away as Montreal. The parents may use this time to vacation themselves. “We have an awesome State Park Campgrounds near by as well as B&B’s who offer our clients discounts. I will get kids who are looking for something different or are really into animals or less socially inclined,” she described her clientele.

A typical camp day starts at 9 a.m. On the first day, it’s all about orientation and laying ground rules. The parents get the tour, then there’s a meet n’ greet for parents and campers of all the dogs. Then parents leave. The kids pick a dog, who they want to be with for the week. “I help each camper get a dog they want and can handle,” Marla said. “Then we put half the team in our pens and kids and dogs get to free play with each other. The rule is no one is allowed to open the gates the first day but me.”

The learning progresses as the kids are taught how to handle dogs safely, and get their introduction to chores: feed, scoop, change water, groom, massage and tick check. Activities include hiking with the dogs, free playtime in dog pens and trips to the river, where campers “swimjor’ with their dogs. “This is our favorite activity of the summer,” Marla said. “My team is trained to swim and pull us across the river and back. We hold on to the ends of their leashes and kick in unison.” The days end with free play or one-on-one time on the dog houses. By the middle of the week the campers begin to learn to dryland mush. Each camper gets to canicross with their dog with trail support and then they progress to ride on the scooter or rig.  Weeklong campers also learn primitive survival skills. Dinners are spent around the bonfire.

For Quinton, he realized that quality time spent with working dogs pays off in good relationships, which is the basis to form true team work. “I have learned a lot from my interaction with Marla’s Alaskan huskies, but what sticks out is how a dog will listen and be much more attuned to you if you spend the time and bond with them,” he reflected. “I have experienced this first hand with my two-dog bike team. The first time I ran the two brothers I didn’t have an easy a time driving them or communicating with them. It felt like there was two dogs pulling me down a rough dirt road, but as I began to bond with them both and do command training with them, the more they began to feel like they were part of me and the bike as we were racing.”

He said that the dogs and he are used to each other’s habits. “We are all working as hard as we can for each other, and you can’t achieve that without sitting down and bonding with the dog.”

Kathleen got a similar life lesson out of her interaction with the dogs. “Interacting with the dogs has taught me how to be more self-confident and to trust myself and my instincts along with those of the dogs. I have also learned how to find more energy to keep going even when I'm feeling exhausted,” she stated.

According to Brodsky, the dogs love it as much as the campers. “It’s the closest they get to being like pets with their own person walking, swimming, hiking, playing and feeding them. They love it, makes the summer fly by,” she stated.

And when fall training starts up again, nothing will faze those sled dogs that have interacted with all kinds of people all summer long. “Everyday I make sure each dog gets one-on-one time when I or the handler check in with them,” Brodsky said. “I touch my dogs all over from birth. I hug them, kiss them, play with them, rough house and, most importantly, howl with them. When mushing I expose them to as much stimuli and diverse environments, small airplanes landing over our heads, loose dogs out for walks, people, cars, snowmobiles, overflow they swim the ATV through. We also love going downtown in the back of the pick up truck, parking and being a petting zoo for the public or, as I like to say, rock stars for a day.”