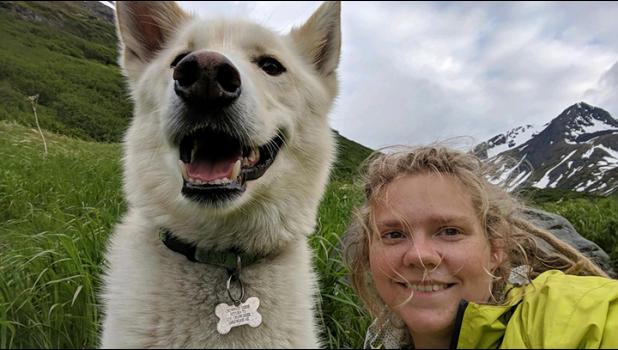 The headlines ran far and wide, from every major news outlet in the U.S., to the Daily Mail in the UK. Even the New York Post ran the story. If you like dogs and have a Facebook account, several friends probably tagged you to read the story, “Husky Saves Deaf, Injured Hiker in Alaska.” “Alaskan Husky Helps Rescue Injured Hiker.”

Who is this modern day Lassie living in Alaska?

Nanook “Nookie” arrived in the life of Scott Swift about six years ago. Swift wanted a few dogs to skijor and a Bethel rescue group had an adoption clinic in the parking lot of the Eagle River Wal-Mart.  Nookie was maybe three months old and off they went to live in Girdwood, Alaska, at the end of Crow Creek Road. The Bethel rescue organization wasn’t sure of Nookie’s lineage. Nookie never really liked the harness and would run and hide when Swift brought it out. But Nookie thrives free running next to his owner on bike rides and back country ski trips. Together they have mountain biked many popular trails on the Kenai Peninsula. They have paddled several area waterways and Nookie loves to hang out on the paddleboard.  But most of all, Nookie likes to join hikers on the trail near his home.

A few months after Swift brought Nookie to his new home in Girdwood, Nookie disappeared. Scott feared the worst — the pup might have been eaten by a bear.  Scott and his wife went to the dog pound to look for him. No Nookie, so they came home with a new dog, this one a Malamute. Of course, the next day Nookie re-appeared, a little thinner but otherwise fine. Somehow he’d managed to lock himself in a neighbor’s house for almost a week while they were away on vacation.

The next summer Nookie disappeared again.  After a few days of worrying Scott got a phone call from the Eagle River Nature Center. Nookie had joined up with some hikers near his home in Girdwood and completed the 21-mile Crow Pass hike with them. The drive between the trailheads is 70 miles and only part of those miles are on a highway. The car ride can take two hours each way.

Soon Swift was getting calls regularly from the Nature Center, up to 10 times a summer. He made a tag for Nookie that said “I love to ski, I love to play, but please bring me back at the end of the day.”  When Nookie lost that tag a few years ago Swift made him a new one that said “Crow Pass Guide Dog”.

That was the tag Amelia Milling saw after breaking her ski pole and sliding down a snowfield into a ravine while attempting a solo hike this June. Nookie appeared and led her back to the trail. He stayed with her and when she lost her footing crossing Eagle River he pulled her by the backpack to the shore. Amelia was soaked and hypothermic. She activated her SPOT tracker and Nookie stayed with her and got a bonus ride in the Alaska State Trooper helicopter.

Nookie has hiked Crow Pass too many times to count, and Swift had tried to reign him in a bit before the recent rescue, mostly because of the long drive to retrieve Nookie. After the publicity surrounding the deaf hiker rescue, Swift realized this dog is a special animal with a special calling. Scott opened the Nanook “Nookie” Swift Facebook page, inviting others to share stories of Nookie on local trails. Several stories emerged, some of rescues, others of Nookie finding the trail and leading hikers. A few years ago Nookie accompanied the Military on a spring training session over the challenging terrain of the Eklutna Traverse, which usually takes six to seven days to complete. Scott has since found out that Nookie has completed that traverse with several other groups of people as well.

Nookie and Amelia starred in a Sony pictures production trailer for the movie Alpha. That trailer also told the amazing story of Nookie rescuing Lindsey Honemann a few years earlier. The trailer had over one million views in two days and is currently at 4.6 million views. Nookie has not had formal rescue dog training but The Alaska Solstice Search Dogs made Nookie an honorary part of their team. Nookie has also been named an Honorary Alaska State Trooper for his heroic efforts.