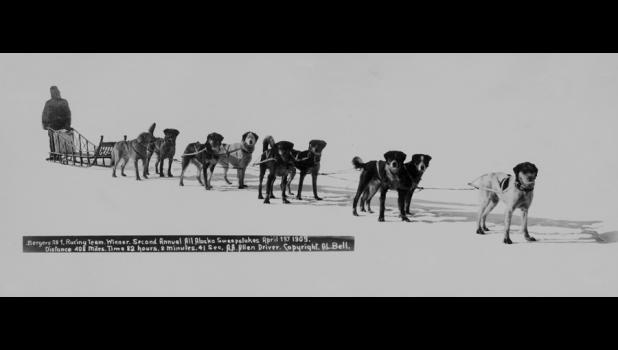 Mushing is all about overcoming adversity. There probably is not a musher out there who has not fallen off the runners at least once, but what makes the individual a musher is that they got back on the sled.

To this day, the town of Nome is defined by gold and dog mushing, and the two are intertwined. In the early1900s, dog races in Nome were short, only three or four miles long, and served important gambling purposes for the gold rush town.

As a way to raise the stakes, the NKC organized a 408-mile competition—the All Alaska Sweepstakes—from Nome to Candle and back. The inaugural race was held in the spring of 1908. Times were slow during the first few races, as the dogs were large animals used for freight and thus valued for power over speed. This changed in 1910, when Fox Maule Ramsey imported three teams of Siberian Huskies from Russia. Iron Man Johnson, driving one of the teams, completed the course in a blistering 74 hours and change. Incredibly, this record stood for 98 years until Mitch Seavey won the 2008 centennial celebration of the All Alaska Sweepstakes in 61 hours.

With an entirely new level of competition, the Sweepstakes continued until 1917. Around this time, interest in mushing declined —possibly because betting on the Sweepstakes winner was not as interesting after Leonhard Seppala won the race three years in a row. Around World War I competitive mushing lost momentum in Nome, and so did the town’s kennel club. The NKC organized a few shorter races, but nothing on the scale of the All Alaska Sweepstakes.

It took a tragic event, the diphtheria epidemic during the winter of 1925, to revive Nome’s dog mushing tradition. The hospital’s supply of antitoxin had expired. At that time, the fastest way to get the life-saving medicine to Nome was by dog team. However high the stakes were during the All Alaska Sweepstakes, now they were infinitely higher—the reward for speed was not money, but lives saved. A relay comprised of 20 of the most experienced drivers assembled to get the serum from Nenana to Nome as efficiently as possible. They managed to cover the 674 miles in a little over five days.

The Serum Run, also known as the Great Race of Mercy, and the act of heroism on the part of the sled dogs and their drivers, garnered worldwide attention. This served both to introduce the rest of the United States to the dog mushing and to popularize the Siberian Husky breed.

Gunnar Kaasen, the musher who mushed the last leg of the relay and brought the serum into Nome, became somewhat of a celebrity. He toured the continental states with his team; Kaasen’s dogs, including the famous leader Balto, were purchased and lived out their days in an Ohio zoo. Seppala and about 40 of his dogs also traveled south and, among other things, brought dog mushing to New England.

Back in Nome, interest in dog racing also picked up. The NKC began to hold shorter races, which continued for about ten years, until the start of World War II. At the end of the 1930s, the gold rush that caused Nome to be founded, was officially over. There was less money in town, fewer people in the region, and, with the advent of mail delivery by airplanes, a diminished need for dog teams. Many mushers, including Seppala, did not personally own their dogs. Rather, the mining companies owned the teams. So when they left, the racing scene moved inland to the Fairbanks area and the Nome Kennel Club fell into a deep, long sleep.

The Arctic Club, an organization that raised money for a variety of causes, held a handful of shorter races until 1962. The heart of dog mushing was still beating in Nome, but the real resurgence came with the first running of the Iditarod in 1973.

Joe Redington, Sr. was concerned about the future of dog teams in Alaska. For years, teams served practical transportation purposes—nearly every family had some dogs. But with the invention of snowmachines, dog teams were rendered unnecessary. Disturbed by the dwindling number of sled dogs, Redington decided to create the biggest race in Alaska.

This is where Nome, and the Nome Kennel Club, came in, again. Nome musher Howard Farley’s first contact with Redington, or Joe, Sr. as he was called, came when he called Unalakleet to ask for some king salmon. Redington, who worked as a commercial fisherman, answered the phone. He and Farley talked later that day, and Redington explained his plan to run a 1,000-mile race from Anchorage to the interior ghost town of Iditarod and back. “Why would you do that, why not bring it to Nome,” Farley inquired. “Nome was the obvious place to end the Iditarod, because of its history,” he stated, alluding to the races in the early 1900s.

Farley, along with Carl Glavinovich, Leo Rasmussen and Ethan Windahl, reestablished the NKC in order to ensure that the end of the Iditarod would be in Nome. Farley explained that he had no trouble bringing back the club, because there was plenty of interest, dog teams and young mushers in Nome and the region.

“Nome has a great history of dogs,” Farley continued. He explained that, because Nome is so isolated —in the old days the town would sometimes get one plane a week — dog mushing was a source of entertainment. “We would have races down Front Street on Sunday afternoon after church,” he said. Dog mushing was just part of Nome’s culture. “The time was right,” he said. Farley visited local bars to raise money, and the Kennel Club helped to fund the first Iditarod.

The Club’s ambitions went beyond the Last Great Race, however. In 1975, NKC put on a reenactment of the Serum Run in honor of the 50th anniversary of the Nenana to Nome journey. The Club also began to plan a return of the All Alaska Sweepstakes. After years of preparation, the 408-mile race was held in 1983, 75 years after its inception. Rick Swenson won that race in 84 hours.

In 2008, the Nome Kennel Club put on the All Alaska Sweepstakes to honor the centennial anniversary of the first running of the event. “Pulling off the 100th anniversary of the All Alaska Sweepstakes was a real coup,” said NKC President Kirsten Bey. The race drew in numerous local mushers, including Bey, who called it an “incredible experience,” as well as several former Iditarod champions such as Jeff King, Lance Mackey and eventual Sweepstakes winner Mitch Seavey.

Today, the NKC has about 35 members. Currently, the club works to promote dog care and the “historical use of dogs for work, travel and racing,” said Bey, as well as to support animal adoptions and responsible pet ownership. It is also the mission of the club to support the Iditarod and Jr. Iditarod. Along with organizing races, the club’s duties involve staking trails and maintaining the Topkok shelter cabin. Living off the road system makes it difficult for mushers to qualify for larger races such as the Iditarod and the Yukon Quest, so the club holds races to help mushers throughout the region to accomplish their competitive dreams. To provide structure for dog racing in the area, the club organizes few shorter, 20 to 30 mile races, as well as an annual 200-mile race from Nome to Council and back.

NKC also sponsors an award for the Iditarod musher with the fastest time from Safety to Nome.

For Bey, one of the club’s most important contributions to the community is the Businessman’s race, an annual fundraising event during Iditarod week when local mushers lend their teams to let visitors try their hand at racing a three-mile loop. As many as 36 “mushers” have participated in the event, which “may be the only time they actually get the opportunity to run a team of sled dogs on their own,” said Bey.

NKC is still a presence in the community, albeit with only a few active dog teams. Club President Kirsten Bey has been a member since 1995. She said that the number of teams in the community has “significantly decreased” in her time with NKC—going from 15 to about eight. So the future of the NKC is hard to predict, according to Bey. Dog mushing by nature is an expensive endeavor, even more so when living off the road system, which makes it difficult to attract new mushers.

Yet as uncertain as the future of the Nome Kennel Club may be, if its past is any indication of its future, the club will persevere.