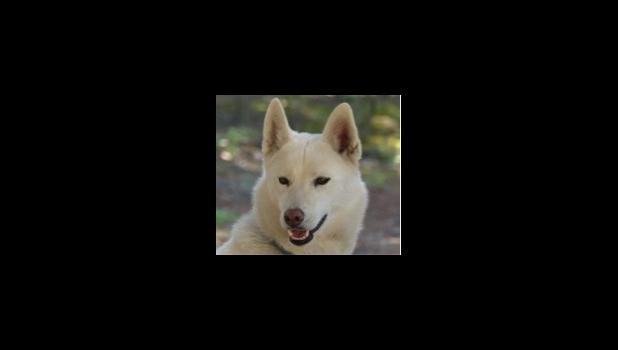 I have never had one of those dogs that has saved my life, knows instinctively where the ice on a lake is weakest and dragged the team away from it; the leader who has, when the team has plunged through rotten ice, single-pawedly, pulled the entire team to safety; a Gus of Iron Will, an Apache of The Last Trapper, a Maya of 8 Below. So this is obviously not going to be a story of one of those dogs. It is, however, going to be a story of my best leader, a dog more motivated, more focused, more intelligent and more in tune with my needs than any other dog I have lived with.

Maddie was born to two pretty exceptional parents, Penkhala’s Medea of Shaytaan, one of the puppies we brought with us when we moved from the UK in 2005 with the objective of running the Yukon Quest, and Kraken’s Kermit the Frog, a dog we travelled one third across Canada in 2006 just to have a quick look at. Maddie was the one female of our ‘Crazies’ litter, born on June 1, 2009.

With four brothers, Psycho, Nutter, Skits and Loonie, who are strong, independent, have ravenous appetites and have always been boisterous and opinionated in the extreme, and a mother whose parental ethos was tough love or no love, Maddie grew up as hard as nails.

Then, as well as now, her brothers were much more likely to be intimidated by Maddie than the other way around. Her brothers, bigger and stronger, were introduced to the race team slightly earlier than Maddie. She sat out the first of our races in the north, the 2011 Sheep Mountain 150, when her brothers all started their mid distance careers. It was not until the closing stages of the finish in the 2012 Yukon Quest 300 that I really started to see her potential. Trying to maintain the place that we had secured in and out of the final checkpoint of Circle, the team —running their longest race to date — started to flag with 60 miles to go to the finish. For some reason, and under the most incredible northern lights ever, I moved Maddie into lead and immediately she lifted the whole team. Any doubts I had that we would not only finish, but finish in second place, evaporated into the chill Birch Creek night. Six miles from the finish line, the dogs were getting battered by the willow whips that any Quest competitor knows plagues the run in the ditch to Central. Not wanting to sour this young girl, on one of her first runs in lead, I decided to replace Maddie in lead with one of the more experienced dogs. A rookie error to stop the team over 290 miles into a race, tired and so close to the finish, the team slowly started to shut down with the end in sight. Gripped by a certain amount of panic, I tried a number of leader combinations as more and more of the team lay down. Maddie stood in the middle of the team, giving me a questioning look —certainly not the last time that would occur. With nothing at all to lose, other than our place and potentially a finishers/qualifiers status, I put Maddie back into lead. She immediately hauled the team back to their feet and ignoring the willow whips like the veteran of many Quests that she was to become, she led the team to an almost unprecedented, for a pure-bred Siberian team, second place finish.

You would think such feats would cement Maddie firmly into the position of main kennel leader however stupidity and naivety are not alien traits to this particular musher. And so, despite Maddie finishing her first Yukon Quest, along with her four brothers in 2013, it was not until about 400 miles into the 2015 Yukon Quest that she had cause to remind me that when things get tough she is always the answer to my prayers.

A brutally cold start to the 2015 Quest, with -45°C on start morning after a relatively mild winter, and with the mercury continuing to drop and mushers scratch, stupidity and naivety returned with a vengeance. Having spent eight hours at the Stepping Stone Hospitality Stop waiting for the promised warm up to take temperatures back above -40° to -50°C I decided to do a single 70 mile run to the dog drop at Scroggie Creek. Not realising how the cold temperatures had impacted on the dogs, passed by a number of teams through Valhalla and not having trained for too many of these ‘longer’ runs’, five miles before reaching Scroggie, the leaders decided it was time to rest. Knowing how close we were, I tried leader after leader in desperation to keep the team moving, even deciding that maybe I should run in front of the team for a bit. As I was deciding that the dogs had won and we would have to await a tow from one of the few teams still behind us, I was again greeted by Maddie stood in the center of the team giving me a look – this time the look was something akin to ‘Oi, moron, how about putting me in lead???’ Not one to ignore the demands of Maddie I moved her into lead. The impact was immediate, the rest of the team immediately got to their feet and we ran, at some speed, those final few miles into Scroggie Creek, to straw, to food and to sleep.

Maddie’s heroics did not finish there. She remained in lead for the next 500 miles, by far the majority of which she was in single lead.

With even more scratches and withdrawals happening in front and behind us, we didn’t see another dog team from Scroggie all the way to the finish line 600 miles away. Whilst my mood fluctuated between mild depression, desperation, deep depression and a never- ending desire to quit, Maddie never looked likely to give up – she kept us going through thick, thin and Yukon Quest hell and onto the 2015 Yukon Quest Red Lantern award. For many dogs this would be enough but fast forward a few weeks, another brutally cold race, many more adventures and there was Maddie leading the team along Front Street, Nome and dragging the team into the history books as the first Siberian Husky team to finish both the Quest and Iditarod in the same winter.

A year ‘off’ in 2016 to look after her first litter of puppies, Maddie was back performing heroics for the team again on the 2017 Quest. Against some pretty good advice, the stupid and naïve one was still making the decisions that were not always the best for the team, this time deciding to start the Quest with a female coming into heat. As we crested King Solomon’s Dome, five days into the race, to begin the long descent into Dawson and the very much anticipated 36-hour layover, a few of the males appeared to collaborate in ‘wooing’ Lady, the female in heat, the males were trying to get at her from all directions. Even moving Lady into wheel and surrounding her by other females seemed to have little effect as the males kept trying to turn around to say ‘Hi‘. The only solution appeared to be that she had to go in lead with the hope the males would follow the scent, so to speak. Unfortunately Lady was not too keen on the idea of leading and once again I was greeted by the Maddie ‘look’ – so in the lead she went and off we went. Maddie’s heroics were still needed and she remained in lead pretty much for the remainder of the race, another 500+ miles; once again, as in 2015, our Yukon Quest Finisher’s Patch really belonged to Maddie because without her we would never have made the finish line of either race.

As we train for our seventh Quest I am happy to say that Maddie and all of her brothers are back in training with the race team. At the start of training they are all looking good despite now being ten-and-a-half years old but I am under no illusions that as training get longer and tougher then they are less and less likely to keep up with the rest of the dogs in training. Still I hold out that very small hope that Maddie may just be there one more time to save the day, again. 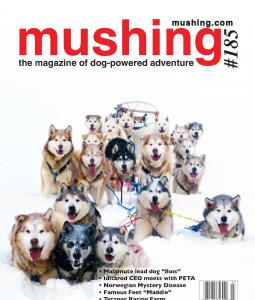