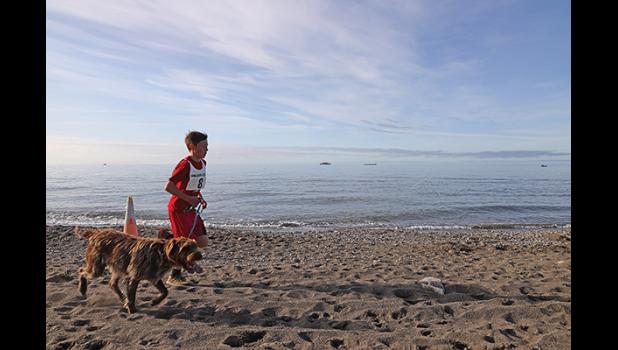 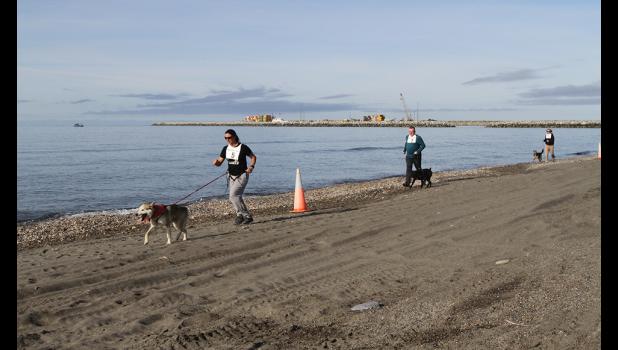 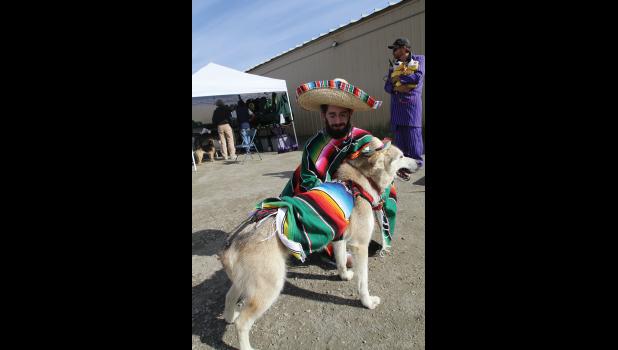 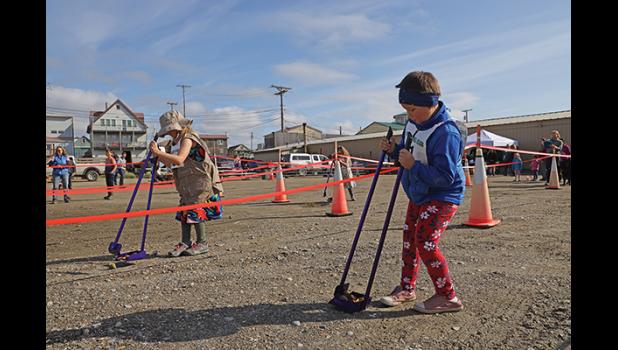 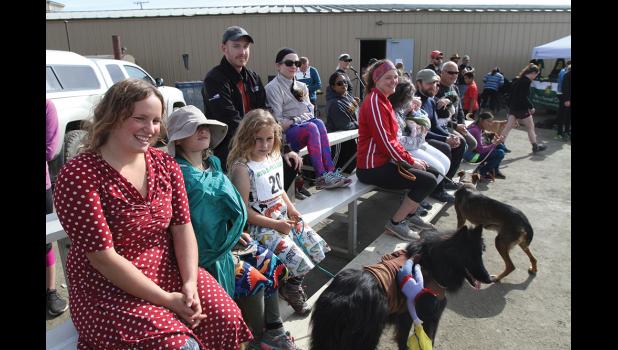 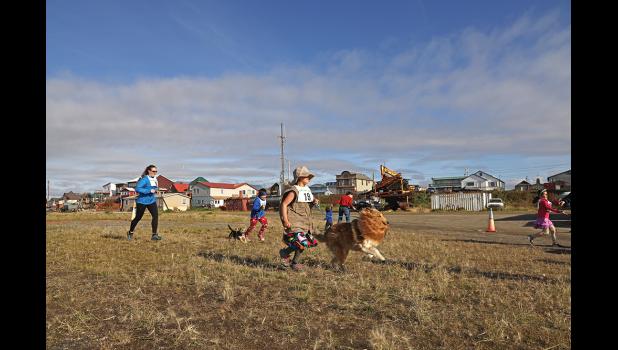 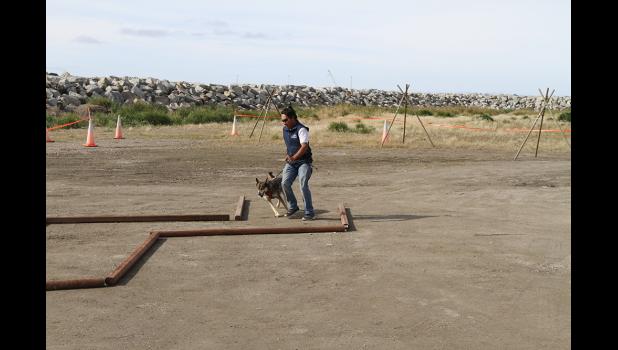 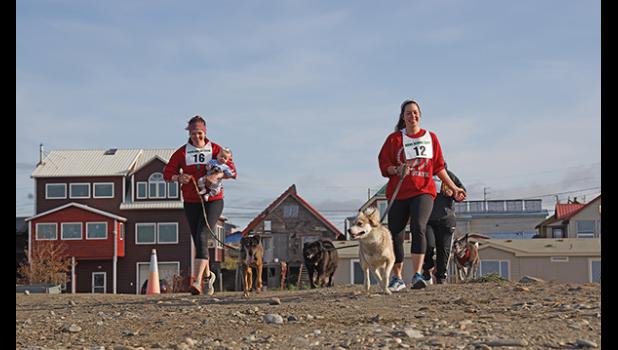 Bleachers were in place, the hot dogs were sizzling, tables were decked with prizes and the sun had chased away rain clouds that had dumped sheets of rain on Nome just days prior the first annual Nome Kennel Club Dog Fair and Best of Nome Dog Show on August 24. Everything seemed to come together as the Nome Kennel Club ventured to test new waters by putting on a dog-centered event for the whole community of Nome.

By 10:30 a.m. Nome Kennel Club members and volunteers were ready to sign up the canicross runners for the first event of the day-long affair that revolved around humans and their canine friends. There were 16 runners, including some members of the Nome XC running team, who showed up to participate without a dog. No dog, no problem. NKC members had good-natured dogs on hand and paired them up with runners that were short a canine. At the location that serves the Iditarod as race headquarters in Nome and the dog yard in March, 16 runners and their dogs gathered, were ready, set go for a one-mile scenic run along the beach in front of Nome. They ran or walked, with all kinds of dogs ranging from high-powered sled dogs, to shepherd dogs, labs, spaniels, hunting dogs, tiny dachshund mixes and even one village dog named Uchi from Malawi, Africa. It’s owner Hilary Fello had found him when she served with the Peace Corps in Malawi and when taking a job in Nome, the dog came with. Uchi, she said, adapted well to Nome by adding two pounds of fur to his coat in the winter and developing feathers between the toes.

The mass start went off without a hitch and the runners made their way down to the beach with a scenic view of the calm Bering Sea with a few gold dredge boats bobbing in the roadstead in front of Nome and the U.S. Coast Guard’s icebreaker Healy anchored on the horizon. Scientists on R&R in Nome from the Healy appreciated the fact that their land excursion coincided with the NKC event and they had a hoot, seeing the dog people of Nome show off their canines.

The one-mile canicross was over fast with Nome student and XC team runner Tobin Hobbs and his ‘loaner’ dog Drizzle out of NKC board member Stephanie Johnson’s kennel took first place in a time of 7 minutes and 29 secs. The red lantern went to Valerie Fuller who toted her baby Cassie along, with her retired sled dog Wookie, at 22 min. 41 secs. Next up was a Kids Dash event that paired dogs with their kids and a grown-up for security. Again, no dog, no problem. Nine-year-old Kathrynne Dixon had forgotten her dog at home but wanted to run so she was paired up with dachshund mix Gidget. Despite Gidget’s short, stubby legs, the pair came in third place, just behind sisters Rosalie and Amelia Richards, who ran with their dogs Winter and Tikaani. The Richards’ girls dressed up themselves and their dogs, in anticipation of the costume contest that would culminate the event. Amelia dressed up in a safari theme, and with his lion-mane ‘wig’ her rough collie dog Winter could’ve passed as a mighty king of the jungle. Rosalie wore a cowboy themed outfit, and her dog Tikaani – meaning wolf in Athabascan- wore a saddle and a dangerously sideways leaning doll rider.

The next event involved no dogs, but reflected a chore in the daily lives of mushers: The pooper scooper race. NKC had procured artificial and very realistic looking turds to bring home the message in a fun way to practice good dog yard hygiene and for individual dog owners, to pick up after the dog. Four lanes were quickly built, 11 turds per lane dispersed and the person with the fastest time to scoop up all 11 turds and dump them in a bucket at the end of the lane was declared the winner. While the sound system blared “Who let the dogs out” several heats went underway, six winners received ribbons but everybody was declared a winner for showing up and taking part in the fun.

While NKC volunteers quickly set up sort of an obstacle course for the next event, the trail class of the Dog Show, Nils Hahn and his helper Ethan Ahkvaluk held a 30-minute presentation on how to build a dog house to withstand Arctic conditions out of one sheet of plywood and some dimensional lumber.

While people gathered on the bleachers, munching on hot dogs, the Trail Class of the Dog Show went underway. Participants had to guide their dogs through an easy course of obstacles and in the end, had to jump up on the newly built dog house. Judges, including Nome’s itinerant veterinarian Gil Van Sciver, judged on teamwork, cooperation and willingness of the dog to do what was asked. The next event featured parading one’s senior dog — nine-years and older — around the ring. This gave people the opportunity to show off their older dogs and their skills to achieve longevity in their dogs. The next and final event was the costume contest, where people and dogs dressed up and were judged on their costumes and originality. A tiny six-month-old Yorkshire Terrier named Queeny and her owner dressed as a hula girls and won the division. The had stiff competition: Silas Wade went in partner look with his auntie’s sled dog Hero and dressed in Mexican attire, both sporting sombreros. Stephanie Johnson dressed as Little Red Riding Hood and her sled dog Spirit was Granny Wolf. NKC President Neil Strandberg put on an oversized green suit and dressed his tiny dogs LouieLouie and Iggy Pop in cute hooded outfits. Even Iditarod board member, and interim Nome City Manager John Handeland was reeled in to emcee the event and he brought three of his five pugs to participate.

There were educational displays on dog health supplied by the local pet store Nome Animal House and displays from the local health corporation’s Environmental Health Program that educated people on proper vaccination protocols.

Putting on an event for the broader public, the Nome Kennel Club sought ways to promote dog health and to encourage people to get out and have fun with their dog. Since it’s beginnings in 1907 when the club formed to organize the All Alaska Sweepstakes, it has focused on mushing and sled dogs and to further the breed of sled dogs by promoting good dog care. This was NKC’s first event that featured dogs of all types. “The goal of this is for the Nome Kennel Club to step out of being just for mushing and to start promoting the health of the animals and for pet owners to get out and have fun with their dog,” said Stephanie Johnson, NKC vice president. 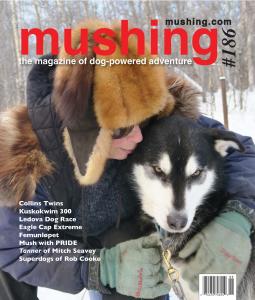